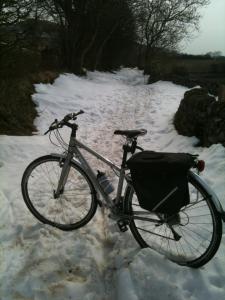 This was a day of thank you ! Thank you to everyone who has ever planted bulbs at the roadside. Daffodils , crocuses .. you lift the mood punching above your size .Thank you !
Fog greeted the day and with the intention of getting above it I made for the top of the Moor. The route to Sawley abbey ,now in Lancashire ,but historically Yorkshire proved difficult to link into my tour timetable . I decided to visit on a day trip of training . Its quite a climb up to Cowper’s Cross and I don’t mind admitting to pushing ,but clinging fog still held the high moor in lock down . It’s a great place to think of the valleys below ,Airedale and Wharfedale and pray blessing .The cross a form to cling onto in the fog of life .
Knowing I needed to cross the Pennine watershed, I was expecting plenty of ups and downs . It was a strange sensation then to have fog so thick that it was difficult to work out if the road was going up or down and to cycle through snow drifts higher than me on both sides of the road . So it was with an added sense of relief that the sun was shining at Sawley and the huge stones radiated a pale heat from the strengthening spring sun . Sawley a small abbey but a place of rest , faith and learning for over 400 years sitting juxtaposed Pendle Hill. A beautiful quiet place in the Ribble Valley . A place of spiritual history . Not much remains of this great place founded in 1147 . Born of an obedient zeal to take the gospel from Citaeux in France into all the world , the legacy of Christians is immense . The beheading of the Abbott four hundred years later was greeted with outrage locally and a faction of the pilgrimage of Grace attempted to protest at Sawley .Just sixty or so years later the hold that witchcraft had in the area became well known . The famous trial of ten people ,some confessed witches resulted in hangings for murder through witchcraft in Lancaster and York .
So what of the interest today . It seemed that some of my fellow guests at the ‘Spread Eagle’ were oblivious to the history across the road and ‘had not noticed the Abbey’ The Pendle witches are more celebrated in memory . I write this a day after ‘ We fight not against flesh and blood .. But against the powers of this dark world and spiritual forces of evil … ‘ was read by Amanda Thatcher for all who cared to listen and understand . Sawley Abbey serene and ruined still remains as a counter to the history of Pendle’s fame .Even if Sawley Abbey’s people have been silenced the stones cry out to invite consideration of the faith of the first monks . The forty mile return gave great head space to consider the lilies of the field and be thankful . There was still snow to walk through and hail to fall but the tour of the Abbeys of Yorkshire has begun and you can read more about it here
https://www.justgiving.com/Fiona-Schneider3/

2 thoughts on “Sawley Abbey in all weather”